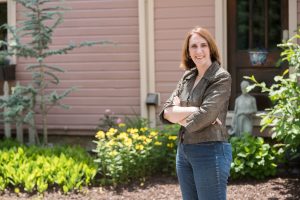 Liz Milliron has been making up stories, and creating her own endings for other people’s stories, for as long as she can remember. She’s worked for twenty years in the corporate world, but finds making things up is far more satisfying than writing software manuals. A lifelong mystery fan, she is the author of The Laurel Highlands Mysteries and The Home Front Mysteries, both from Level Best Books. Her short fiction has appeared at Uppagus and Mysterical-e. and been in Lucky Charms: 12 Crime Tales, the Anthony award-winning Blood on the Bayou (the 2016 Bouchercon anthology), Fish Out of Water, Malice Domestic 12 – Mystery Most Historical and The Killer Wore Cranberry: A Fifth Course of Chaos.

Liz lives near Pittsburgh with her husband and a very spoiled retired-racer greyhound named Koda. She is a past-president of the Pittsburgh chapter of Sisters in Crime, and the current vice-president, and a member of Pennwriters. Find her on Facebook at https://facebook.com/LizMilliron, or follow her on Instagram (@LizMilliron).

I love books. I have for as long as I can remember. I love them so much, I studied English in college, earning Bachelor’s and Master’s degrees. When my friends moaned about spending time in the library or reading, I loved it. This is not to say I loved everything I read (I still regret that I will never get back the time I spent reading Moby Dick) but the library was my second home.

This love of books goes back earlier than college. I grew up in a pretty small town. I still remember riding my bike to the local library on weekends to load up on books. When it snowed (as it did pretty frequently near Lake Erie), people drove me. I devoured books, probably reading the entire children’s section by the age of 12.

It was at that time in my life that my mother and aunt introduced me to Nancy Drew. Oh, I met Trixie Belden too, but something about Nancy really sang to me. Maybe because she was older and stylish and had friends – my exact opposite. I wasn’t stylish and I didn’t have a lot of friends (outside of books). Nancy-with her auburn hair, clothes, car, and boyfriend-was it. And she solved mysteries. Come on.

Nancy was my “gateway drug.”

From there, the natural progression was Agatha Christie. Murder on the Orient Express was my introduction to Dame Agatha and I quickly read everything she’d ever penned that included Hercule Poirot or Jane Marple. It was pretty common to find me in the school cafeteria with a book. It was also pretty common for my classmates to make fun of me for it, but I didn’t care (much).

But I didn’t get the big whoa moment until I read Mary Higgins Clark’s Stillwatch. That book scared the pants off my 13-year old self. And when I put it down, I knew.

Of course I started with some really dreadful stuff. My best friend, a talented artist, and I wrote comics with ourselves cast as dogs (those loveable, snarky mutts) and our enemies as the ultra-snooty purebreds. Of course we always got the last laugh. I’m sure we were funnier in our own minds than in reality.

From there, I moved on to some pretty bad urban fantasy. Well, that’s what it’d be called today. Once again, I was the heroine: smart, funny, snarky, independent – and not bad looking, either. I’m so glad that stuff has been resigned to the dust piles of antiquity, because I’m positive I’d cringe reading it now.

But isn’t that how many writers start?

Shortly after I got married, I started a mystery, a traditional mystery (I’m not sure “cozy” was a thing back then) featuring an amateur sleuth in small-town New York. Then life happened. I had one kid, then another. We got a dog. I had a job. And on, and on.

One day…the job went away. The kids were older. My husband said, “Why don’t you finish that novel?” So I did. The question then was, “Now what?”

I joined Sisters in Crime. I learned what writing a mystery really meant. I learned just what was wrong with that first book and it went under my bed. I wrote a bunch of short stories. I discovered I like writing edgier stuff. I wrote another book. I queried agents. I heard “no.” A lot. I found my critique group.

I wrote another book. I got better.

Something had happened. I had morphed into an honest-to-pete published author.

Here I am. I’m still working a day job as a technical writer. I sold the first three books in The Laurel Highlands Mysteries at the end of 2017 to Level Best Books–which, as any writer will tell you, is just another beginning. The ideas, and the work, never stops.

And I couldn’t be happier.