An Idyllic Place for Murder, the first in The Laurel Highlands Mysteries series was published by Mysterical-e, the digital magazine, in their Fall 2013 issue, under my crime fiction pen name Liz Milliron. And now, it’s going to be available as a digital single via Amazon and other digital retailers.

Would you like to see the cover? <drum roll> 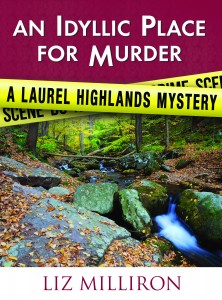 Simple, but effective (I hope). I took inspiration from J.D. Robb and her cover styles, with the bold fonts and color block. The image is actually from a stream that cuts through the Laurel Highlands. And the crime scene tape, well, that ought to tell you what’s inside.

Thanks to Heather Lamison-DeSuta for working with me on the design, and fellow sibs Martha Reed and Susan Gottfried for providing feedback.

The Laurel Highlands seem idyllic, but for Trooper First Class Jim Duncan, they’re anything but. When a young woman visiting from Pittsburgh ends up dead, it’s up to Duncan to find the killer. There seems to be a built-in suspect in The Creeper, but if Fayette County public defender Sally Castle has anything to say, The Creeper won’t end up in prison without a fight.

I may tweak this a bit before publication. But if you’re wondering where it all began for Jim and Sally, this is the place to find out.

I’m getting all of the accounts set up and the formatting completed. Hopefully I’ll push “publish” by the end of the month at it will be available by May.

And there are plenty more stories in the Jim/Sally universe, so watch this space for news!

6 Replies to “Cover Reveal: AN IDYLLIC PLACE FOR MURDER”