Looking for a something good to read by the pool this summer? Something you can pick up, set down, and not completely lose track of the story?

Short stories are good for that. And I’ve got just the thing. 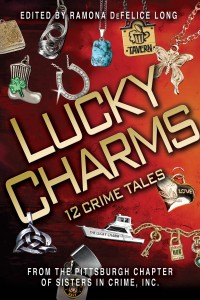 Starting today, May 5, and running through April 5, enter at Goodreads to win a copy of Lucky Charms: 12 Crime Tales from the Pittsburgh chapter of Sisters in Crime.

Want to know more about the anthology? Here’s the link.

Lucky Charms contains my story, Batter Down, a Laurel Highlands Mysteries (written as Liz Milliron). The eleven other stories are fabulous, including one from my friend Annette Dashofy. Sweet Deadly Lies is set in the same fictional Monongahela County universe as her terrific Zoe Chambers series from Henery Press (and I hear the debut, Circle of Influence, is tearing it up the sales charts).

I’ve got the cover for the second in my Laurel Highlands series here waiting. 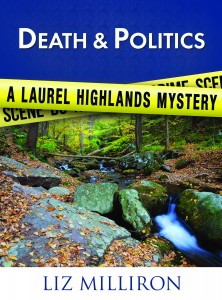 Yes, it looks a lot like the cover for An Idyllic Place for Murder. I think that’s what they mean when they say “branding.” Here’s the blurb:

It’s election season. Everyone knows that gubernatorial candidate William Carmichael has a history of infidelity, but when his wife turns up in the woods near their house, strangled, Jim Duncan and Sally Castle must find out if it was jealous revenge – or political expediency.

Also written as Liz Milliron, Death & Politics will be available as a digital single at all e-tailers on June 1, 2014