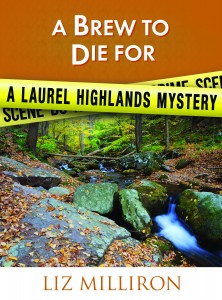 It’s here! Just in time for the US long holiday weekend. Release day for A Brew to Die For, the fifth story in The Laurel Highlands Mysteries series. This time, fall is in the air as Jim and Sally investigate murder at a local home brewing competition.

It’s the first-ever home brew competition sponsored by The Copper Pot – a popular local bar, and anticipation is running high with a grand prize of cash and inclusion in the catalog for a local microbrewery waiting for the winner. But when a promising young brewer is found murdered the night before the competition, Jim Duncan’s rare Friday night off takes on a decidedly bitter note. Was Damon Collingsworth really so distasteful? And just what was the “secret ingredient” in his prize-winning brew?

The story is available for the introductory price of 99 cents at:

Haven’t started reading yet? Here’s another deal. For the month of September, the first story, An Idyllic Place for Murder, is available free at Kobo and iTunes and the original 99-cent price at Amazon and Barnes & Noble (those two retailers will not allow me to price for free, but you might be able to use the “report a lower price” feature on Amazon).